Actress Shilpa Shetty is celebrating her 47th birthday on Wednesday, June 8, 2022. Wishes have been pouring in for the diva from fans, followers and colleagues from the industry. The actress gifted herself a special vanity van complete with a yoga deck on her special day. But that’s not all that happened on her gala birthday celebrations! Shilpa Shetty got a huge surprise on her birthday with not one, not two but five delicious cakes. She shared the full video of her beautifully decorated birthday table with flowers, balloons and the tempting cakes too. “Birthday surprise,” wrote the actress in the caption. Take a look at the pictures of her birthday celebrations: 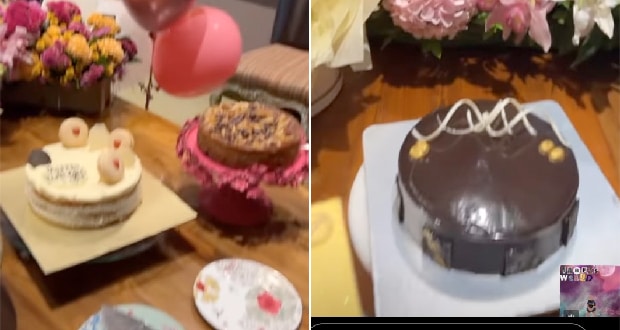 The first cake for Shilpa Shetty’s birthday had the words “Fabulous Shilpa,” written along with a small drawing of her with it. The cake was themed in the colours blue, red and gold, much like Shilpa’s outfit. The next cake was a yummy chocolate truffle with white chocolate shavings on top. There was yet another chocolate cake with the words, “Happy birthday SSK,” on top. It was decorated with blueberries and cherries on top. The last two cakes could be seen from a distance and seemed to be a dry fruit cake and a white chocolate and pineapple cake.

We could also spot Shilpa Shetty’s daughter Samisha Raj Kundra and sister Shamita in the video. Her son Ahaan Raj Kundra was also seen in the video. The adorable family seemed to be all geared up for the actress’ 47th birthday celebrations which were filled with foodie fun! We would love to see more such foodie glimpses from Shilpa Shetty’s life soon.

On the work front, Shilpa Shetty is gearing up toward the release of her next film ‘Nikamma’ alongside Abhimanyu Dassani. It is slated to release on June 17. She has also recently wrapped up shooting for ‘Sukhee’.

About Aditi AhujaAditi loves talking to and meeting like-minded foodies (especially the kind who like veg momos). Plus points if you get her bad jokes and sitcom references, or if you recommend a new place to eat at.

Khubani, Aerocity Is The Ideal Destination For A Luxurious, High-Spirited Weekend