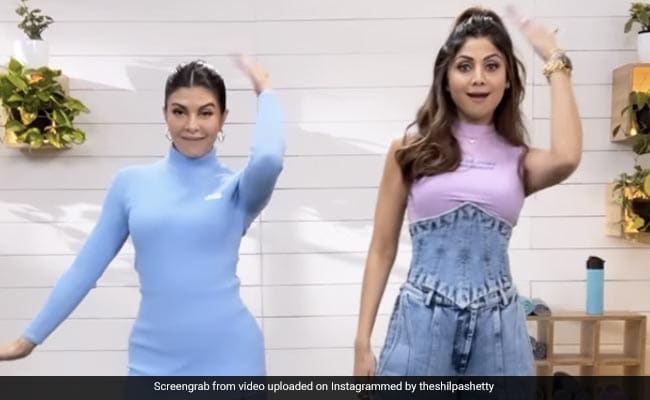 On Thursday, Shilpa Shetty shared a trending reel on her Instagram handle. In the reel, Shilpa can be seen shaking her legs along with actress Jacqueline Fernandez. The two actors danced to the track titled ‘brothers twins’. In the video, Shilpa can be seen dressed in a denim jumpsuit. She styled her look along with a pair of black heels whereas Jacqueline sported her look with a bodycon dress along with a pair of white heels. Sharing the post, Shilpa wrote: “Kidding around,” along with hashtags like #craycray #reels #bts #fun #reelkarofeelkaro and #reelitfeelit.

On Thursday, Jacqueline Fernandez also shared an Instagram reel. The video features Jacqueline posing in a blue bodycon dress with “I am feeling good” audio playing in the background. Sharing the post, Jacqueline wrote: “Feeling blue,”

In terms of work, Shilpa Shetty made her Bollywood debut with Baazigar in 1993. She also featured in films such as Dhadkan, Phir Milenge, Life In A… Metro, Hungama 2 among more. Shilpa Shetty also appeared as a judge on television shows such as Super Dancer and India’s Got Talent.

On the other hand, Jacqueline Fernandez made her debut with Aladin in 2009. The film was directed by Sujoy Ghosh, starring Amitabh Bachchan, Sanjay Dutt, and Riteish Deshmukh. Jacqueline will next be seen in Rohit Shetty’s Cirkus, Abhishek Sharma’s Raama Setu and Bachchhan Paandey opposite Akshay Kumar.

The Kannada film ‘Cutting shop’ has nothing to do with salons

Epigraphica Indica: Showcasing the power of the written word