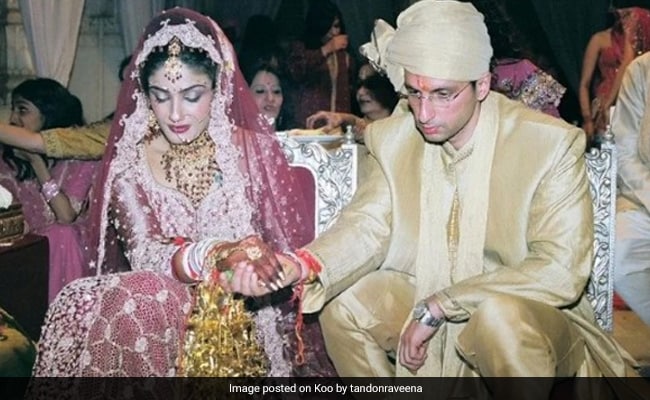 Raveena Tandon and Anil Thadani celebrate their 18th marriage anniversary today. To mark the special occasion, Raveena has posted photos from none other than their wedding day. Isn’t that amazing? In the images posted on the Koo app, Raveena Tandon is looking stunning in red bridal couture. She is sitting alongside Anil Thadani, who looks perfect in a beige sherwani. The newlyweds are seen taking the blessings of their parents. Raveena Tandon’s caption read, “As we get into the “adulthood” of our married lives, 18 years today, I couldn’t have asked for anything more than you. Through our good and bad, thick (me) and thin (you), good times trying times. You are it all.”

Raveena Tandon recently made the headlines when she received the Best Actress award for Netflix original Aranyak at the Dadasaheb Phalke International Film Festival Awards 2022. She has surely blown away our minds with her stellar performance. But here’s what has melted our hearts. As Raveena Tandon celebrated her victory on social media, she paid a tribute to her late father, filmmaker Ravi Tandon. Ravi Tandon passed away at the age of 86 earlier this month. Raveena posted her photos from the award event. She also added the snapshot of her father receiving the Dadasaheb Phalke Academy Awards. Her caption read, “Honoured to be bestowed the “Best Actress” for Aranyak at the Dadasaheb Phalke International Film Festival Awards 2022. Papa received an honour, 14 and a half years ago. The Dadasaheb Phalke Academy Awards Mumbai. And, now this honour for me. This one is for you Pops.”

Raveena Tandon was last seen in Aranyak. In terms of work, the actress will next appear in the Kannada film KGF: Chapter 2, which will also be released in Tamil, Telugu, Malayalam and Hindi.

One thought on “On 18 Years Of Marriage, Here’s What Raveena Tandon Posted”