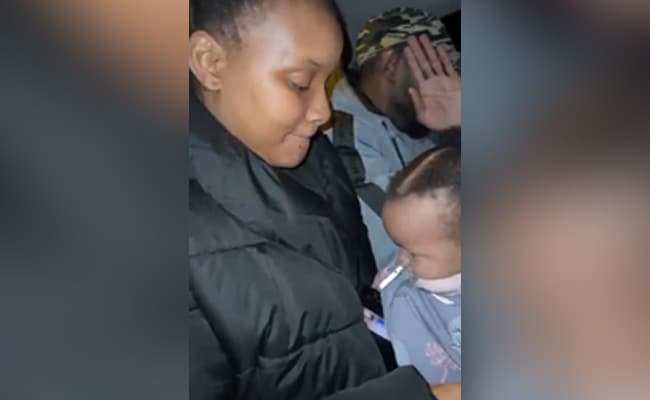 “During her escape she experienced racism, injuries, freezing temps and sleep deprivation. Her story is only one of the hundreds of thousands of people trying to get out,” he wrote in a Twitter thread posted on Tuesday.

The journalist said his sister is adopted, and from Sierra Leone, and this played a significant role in prolonging her exit.

At the border with Poland, separate lines were formed – one for the white people and the other for everyone else – he said, adding that his sister faced the racist treatment that thousands of others have reported at borders, bus and train stations across Ukraine.

My sister was trapped in #Ukraine. This is a thread about her incredible journey to reach #Poland. During her escape she experienced #racism, injuries, freezing temps and sleep deprivation. Her story is only one of the hundreds of thousands of people trying to get out.

Mr Hosseini’s sister was staying in Kyiv when the war broke out. She tried to leave with her friends but “cars were at a standstill” from the capital to Lviv, a city in west Ukraine close to Poland’s border.

“They managed to find a driver who said he could take them to Dnipro (a city in east Ukraine near Russia’s border). From there they hoped to get a bus or train to Lviv. The driver charged them $700 for a 7-hour journey,” wrote Mr Hosseini, depicting it on a map.

On arriving in Dnipro, they realised that buses and trains weren’t running, so they begged the driver to take them to Lyiv. He agreed to do so, for $1,500 more.

“They piled in a small sedan. Eight of them, including a 13-month-old baby. Ready for their 15-hour journey back west,” he wrote, sharing a video of the group packed in the car.

On reaching Lviv, the driver said he would continue and get them to the border. But he apparently changed his mind after 30 hours on the road, and said he had to go back to Kyiv, according to the journalist. “My sister and her friends had to leave the car and attempt to reach the border on foot,” he said, sharing a video of the group walking with their bags and belongings.

“After walking 10 hours in freezing temperatures, they decided to leave their belongings behind to lighten the load,” wrote Mr Hosseini.

“When they arrived to the border they were not let in. Two lines were formed. One for white people, the other for everyone else. Only Ukrainians were being let over the border. Thousands of people were forced to sleep outside in the cold. Fires were started to keep people warm,” he said.

His sister fainted the next morning, exhausted from all the walking, without proper sleep or food in days. An ambulance picked her up at the border and drove her 4 miles back east.

After leaving the hospital, they got a ride back to Lviv and hoped to get a bus ticket out. What was supposed to be a 2:30 bus trip from Lviv to Przemysl in Poland, took 24 hours.

“Once the bus finally made it to the border (the same border she was at two days before) someone announced that ‘all blacks’ needed to get off. My sister and her friends, bravely, refused to get off,” he said.

“They were met with the same racist treatment that thousands of others have reported at borders, bus and train stations across the country.”

After sitting at the border for five hours, they were finally allowed to cross at the end of a four-and-a-half-day or 108-hour journey.

“My sister is lucky. She’s safe, in a hotel where she was finally able to shower and sleep in a bed. There are still thousands of people in her shoes trapped on the other side. More than half a million refugees have fled Ukraine, during the Russian invasion, according to the UN,” Mr Hosseini tweeted.