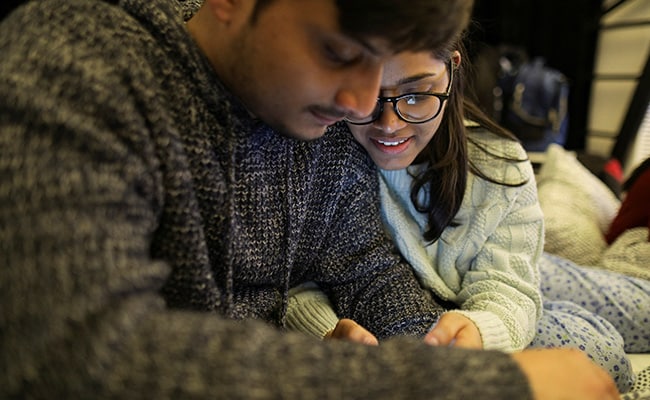 Harsh Panwar and Reva Shrivastava met and fell in love while studying medicine at a Ukraine university.

Harsh Panwar and his girlfriend Reva Shrivastava slept soundly for the first time in a week at a shelter in a wedding venue near the Romanian capital Bucharest, after fleeing Ukraine to the sound of sirens warning of Russian air strikes.

Mr Panwar, 21, and Ms Shrivastava, 19, met and fell in love while studying medicine at a university in western Ukraine.

After the Russian invasion began, they and many of their compatriots joined long queues of Ukrainian women and children and other foreigners streaming across the border into neighbouring Romania.

“It was just like crossing the border from cruelty to hospitality,” said Ms Shrivastava, recalling the crush of crowds and loud yelling amidst the confusion.

“We were just totally out of our minds. For two days we were on the road without any shelter, without any facilities and they were just treating us like nothing.”

Some non-Ukrainians, including some African citizens who were in the country, have complained of poor treatment by border guards as they tried to get out.

In response to the criticism, Ukrainian Foreign Minister Dmytro Kuleba said in a tweet late on Tuesday that everyone should have equal opportunities to get back home.

“Ukraine’s government spares no effort to solve the problem,” he said.

The United Nations estimates that close to 700,000 people have fled Ukraine to neighbouring countries since the invasion began, in what the UN Refugee Agency warned looks set to become Europe’s largest refugee crisis this century.

From the Romanian border, the couple joined a large group of foreign students driven to villages near Bucharest’s main airport from where they were waiting to fly home.

The couple spent the night at a wedding and events venue in the village of Corbeanca nestled next to a lush forest, the ceiling covered in fairy lights.

“We spent the night very peacefully and we are not at all afraid about anything,”Mr Panwar said. “In Ukraine we were afraid of the war.”

He said that when they first saw the fairy lights it felt like they were “about to celebrate something.”

The venue, which has not hosted a wedding since October when authorities reintroduced restrictions to curb the COVID-19 pandemic, can accommodate more than 100 people, with volunteers donating mattresses, sheets and other items.

“We hope we won’t need to, but we will be available for all refugees as long as needed,” said Dora Patrascu, communications director of the venue called Padurile Regale.

Some other Indian students who fled to Romania worried hope to return to Ukraine one day.

“We want to come back to Ukraine, not in any territory of Russia,” said Bhanu Pratap Sigriwal. Ritika Pandey added: “(To) free Ukraine.”

How Did Son Of PM Modi’s No. 2 Enter Cricket