Artists celebrate the power of cinema in Hyderabad with Chitram, a bright collection of paintings, installations and sculptures inspired by films from across India, from Mumbai to Mithila

Artists celebrate the power of cinema in Hyderabad with Chitram, a bright collection of paintings, installations and sculptures inspired by films from across India, from Mumbai to Mithila

The artworks to be showcased as part of the exhibition Chitram are intended to work like a nostalgia passport for movie buffs, to celebrate cinema through the decades. Artist and curator Annapurna M hit upon the idea during the pandemic, observing how entertainment served as an escape from confinement within the four walls: “All of us were dealing with a situation we had never faced before. For many, watching films helped overcome depressing thoughts.”

Annapurna shared the idea of an exhibition inspired by cinema with artists across India. They responded with paintings, installations and sculptures tracing the evolution of cinema in different languages — Tamil, Telugu, Hindi, Kannada, Marathi, Bengali and the lesser-known Maithili.

Chennai-based artist KR Santhana Krishnan, often referred to as ‘doors’ Santhanam for his door paintings, which work as a gateway to memories of yore, reimagined present-day film visuals in an old-world hand-painted style. In his paintings, the walls adjacent to the bright-hued doors come alive with visuals from the Telugu films RRR, Pushpa and Acharya.

Years ago, he says he noticed bright doors offset with a turmeric-hued baseline in the Andhra Pradesh region and used it for a painting featuring the Chiranjeevi-starrer Acharya: “Since the exhibition opens in Hyderabad, I wanted to paint Telugu film images. When I began working on this series six months ago, the first posters of these films were out. Pushpa and RRR have turned out to be blockbusters and Acharya will release in theatres soon. The timing has been perfect,” he states, adding that he cross checked the Telugu fonts with friends.

Mentioning with pride that one of his artworks was featured in a scene in S S Rajamouli’s Eega ( Naan Ee in Tamil), he says hand-painted movie posters have a nostalgic value: “When my first movie poster inspired by MGR’s Enga Veetu Pillai was showcased at the Singapore Art Fair, a German national said the artwork brought back memories of his trip to India. A film poster of Bobby, for example, will remind someone of their college days. We associate cinema with different stages of our lives.” Annapurna points out that some renowned Indian artists began their journey as poster painters: “In arts college, one of the first images many students learn to sketch is a portrait of a well-known star.”

Stars and their weapons

Reputed Hyderabad artist Laxman Aelay worked as a poster designer and art director for some of Ram Gopal Varma’s earlier films. His painting is a throwback to RGV’s cult hit Shiva starring Nagarjuna and Amala. At the forefront of the image is the lead actor’s fist firmly gripping a cycle chain, serving as a reminder of the action sequence that became a rage in 1990. The background is speckled with the several weapons used in Baahubali. “I have been fascinated by the unlikely weapons used by heroes in Indian cinema, be it the cycle chain in Shiva or the range of weapons in many Rajamouli films,” says Aelay. 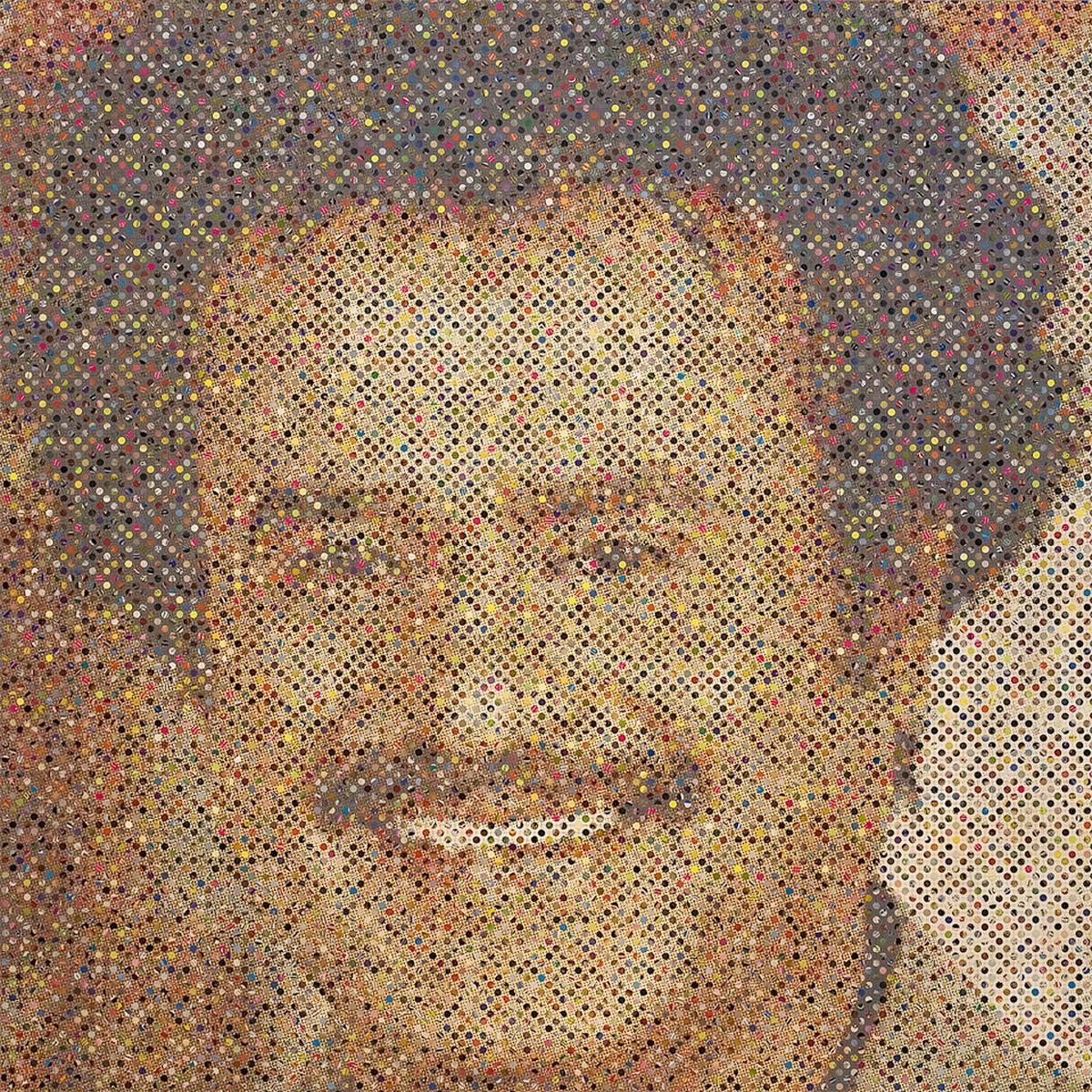 Chennai artist Anamika Ramachandran’s dotted image of Rajinikanth, juxtaposed with another work where one has to gaze into the dots for a visual to appear, is inspired by the ritual of chanting: “When we chant a verse or a word many times, it becomes a part of us in due course of time,” she says. Adding that the dotted visual was arrived at by putting together several newspaper bits, she says it is a reminder of growing up watching Rajinikanth movies. Step closer to the artwork and one can notice the depth of the (paper cutting) dots within a grid. Her husband N Ramachandran’s mixed media installation titled ‘@’ is a homage to his mother’s spice box with its colourful spice powders and the myriad happenings on a typical Indian street. He placed several objects collected over the years in the smaller boxes of the spice box-like structure, interspersed with film-related visuals: “I thought the spice box approach would be relevant to our memories of cinema.” Artist Sanjay Das recalls the impact of watching Satyajit Ray’s Bengali classics during Durga puja through works that recreate the light and shadow effect of Ray’s films. Using madhubani style of painting, artist Avinash Karn shines the spotlight on the lesser-known Maithili language (a language native to some parts of India and Nepal) cinema through a painting inspired by the Maithili film Sasta Jinagi Mahag Senur.

(Chitram will be showcased at State Gallery of Art, Hyderabad, from April 16 to 24, and on annapurnacurator.com. Plans are on to showcase the exhibition in Mumbai, Chennai and other cities in the near future)

‘The Sandman’ to arrive on Netflix in August