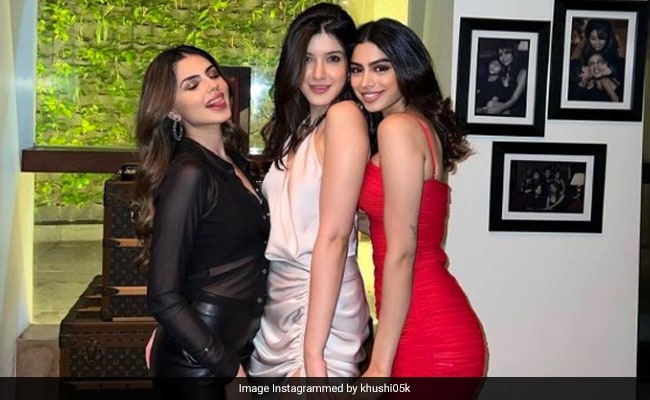 Khushi Kapoor is once again a superhit among her friends. Reason? Her social media updates from a well-spent evening. The star kid always keeps us hooked to her Instagram posts.

This time, one of her celebrity friends is also interested in what she has shared with her Instafam. Khushi’s latest post is a compilation of photos of good times spent with friends. From giving us a view of a stunning sunset to making our hearts stop at the sight of her pet pooch, the social media update ticks all the checkboxes to grab our attention. Khushi also posted a photo with her rumoured boyfriend Akshat Rajan.

To top it all, Khushi Kapoor posed for a photo with Shanaya Kapoor and Muskan. All three women look stunning in their party dresses. While Khushi and Shanaya stand looking at the lens, Muskan shuts her eyes and simply smiles for the postcard. Khushi captioned it with only a smiling sun icon. One of the first comments came from Suhana Khan. Referring to the frames hung on the wall, Suhana wrote, “Love how I have sneaked my way into the pic.”

Khushi Kapoor’s aunt Maheep Kapoor dropped a bunch of red heart emojis. Akshat Rajan commented with a red heart icon. Here are the pictures we are talking about:

Khushi Kapoor is surrounded by her friends and family this season. How do we know? Earlier, she had posted two photos with her elder sister, actress Janhvi Kapoor and friends. The photo seems to indicate a girl’s night out. Khushi Kapoor captioned it with dancing girl emojis while her sister mysteriously dropped the name of British actor Tom Holland in the comments section.

Khushi Kapoor stunned us in a yellow co-ord set and sent the fashion world abuzz with her sartorial pick. But here’s what we loved even more than her outfit and designer bag. Can you guess what we are talking about? Of course, we are all eyes on Janhvi Kapoor’s comment. Janhvi wrote a typical “sister” comment, “Can I give you kissy and one cheek bite, please?” Adorable, isn’t it? We agree. Dad Boney Kapoor commented with fire and heart emojis while sister Anshula Kapoor wrote, “Obsessed with you,” and added heart emojis.

Khushi Kapoor is the younger of the two daughters of Bollywood producer Boney Kapoor and late actress Sridevi. Reports suggest she will make her Bollywood debut this year.

New ‘Daredevil’ series in the works at Disney Plus