‘Epigraphica Indica,’ a solo show by Pushpamala N, is currently underway at Gallery Sumukha in Bengaluru

‘Epigraphica Indica,’ a solo show by Pushpamala N, is currently underway at Gallery Sumukha in Bengaluru

In ‘Epigraphica Indica,’ Bengaluru-based artist Pushpamala N displays how the written word wields its power in everyday life. Two sets of exhibits are part of the show — ‘Atlas of Rare and Lost Alphabets’ and ‘Nara’ (slogans).

“Epigraphy is the study and interpretation of ancient inscriptions on metal or stone. That is why the show is called Epigraphica Indica. I was always interested in documents, and various aspects of history have been ingrained in my work from the very beginning,” says Pushpamala, who has regularly used 19th-century concepts of ethnography, anthropology and archiving, in her previous works. The ‘Atlas of Rare and Lost Alphabets’ are a set of a hundred copperplate sculptures inspired by the artist’s visit to an archaeological museum in Bengaluru. Pushpamala says ‘Atlas’, like a lot of her other works, was inspired by Walter Benjamin’s Arcade Project, one of her favourite books. “He looked at the present as a ruin and examined it like an archaeologist.”

In ancient India, important documents such as land deeds and official edicts were etched on copperplates and were called tamra shasanas (copper edicts). Pushpamala decided to recreate them using the technique of etching and over three years from 2015 to 18, inscribed copperplates with various scripts of the Indian sub-continent by hand. She worked with different chemicals to create a patina and as a result, each plate looks as though it was unearthed at a historic site.

“Though the process of writing and drawing was tedious, I enjoyed it as it was very different from my usual rhythm of working with photographs, videos and live performances,” she says. 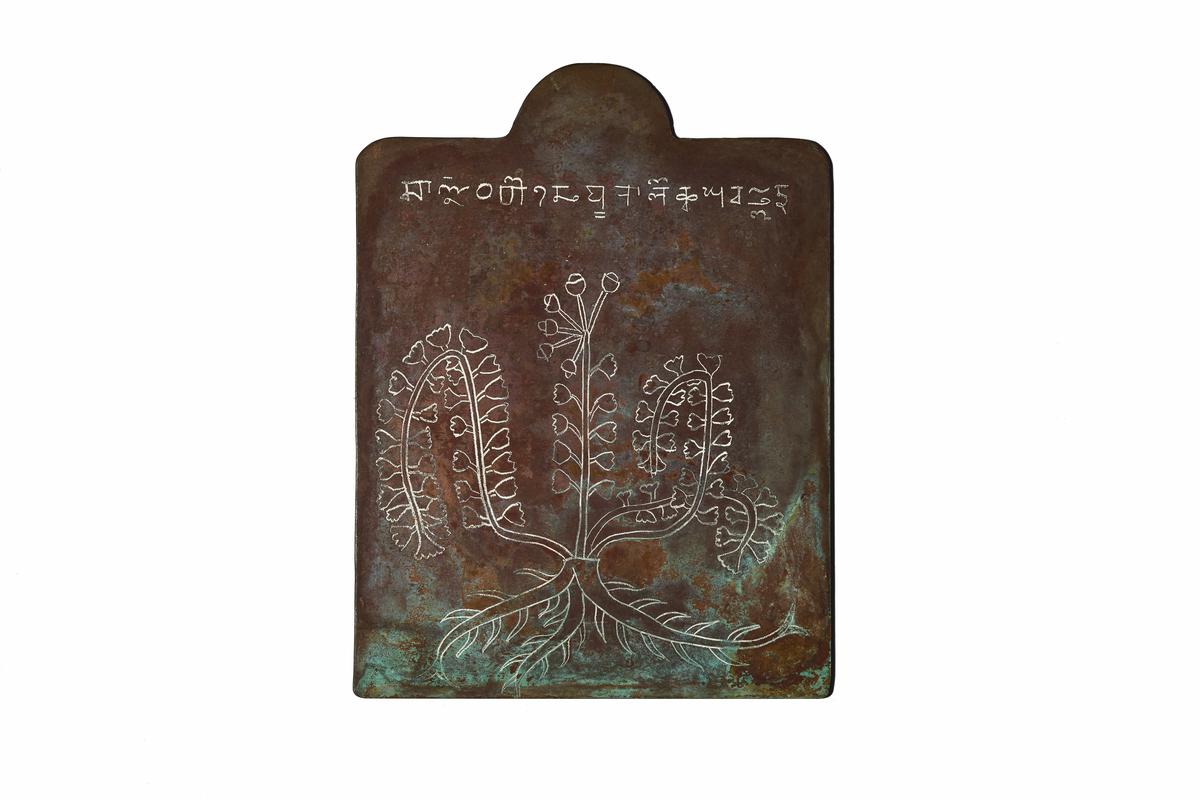 While researching for this project, Pushpamala found out there was a worldwide movement dedicated to preserving and documenting scripts that were disappearing. “There were older forms of Kannada and Tamil; Tulu — always thought to be an oral language — once had a written script which fell into disuse during colonial times. Assamese too had a script, but now uses Bengali. At the same time, people are also working to create scripts such as Kodava. The Phags-pa alphabet created by a Chinese monk during the Yuan dynasty was written from top to bottom. It had the appearance of Indian letters, but never really took off and only a few examples of the script remain,” she says.

Pushpamala elaborates that the subcontinent — India, Sri Lanka, the Maldives, Tibet, Afghanistan — is home to hundreds of scripts. “I doubt there is such diversity elsewhere,” she says, adding, “There is also a political side to this issue as communities which only have an oral language feel deprived of identity, prestige and a recorded history of their being. Though their literature might use some other script, they feel the need for a specific script of their own.” 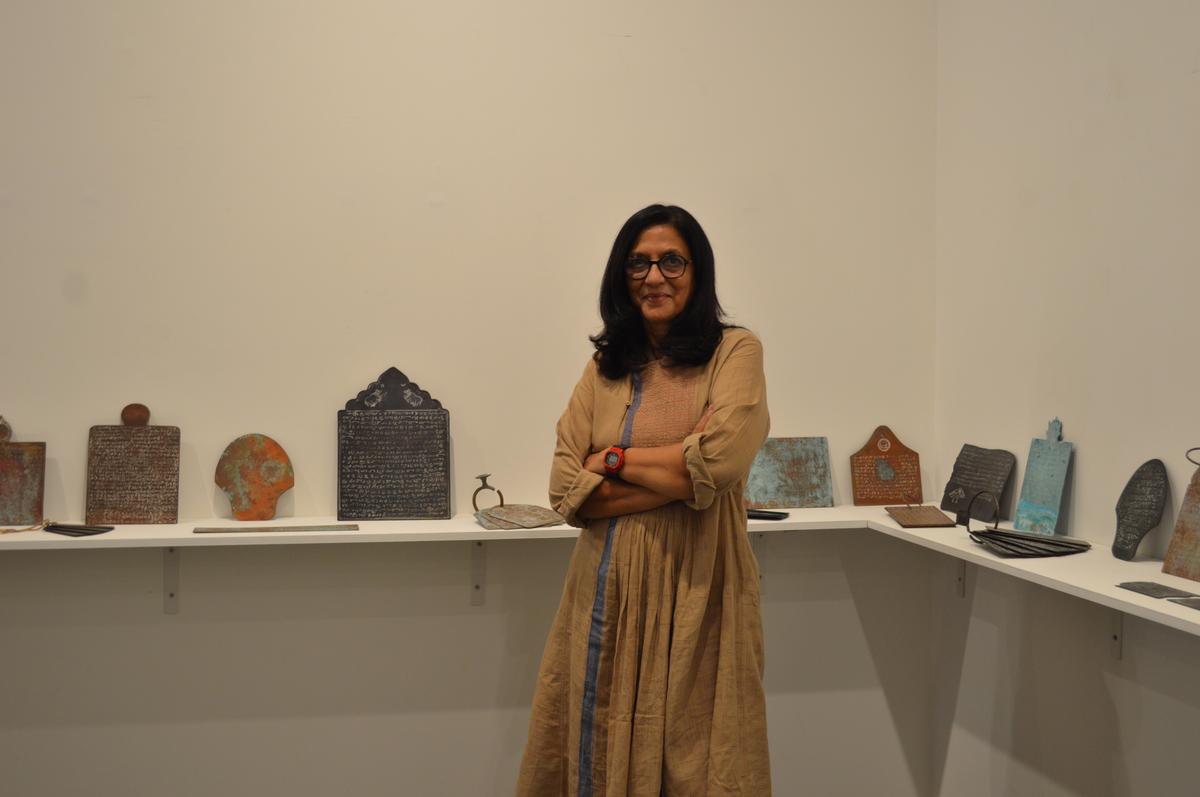 True to form, some of the exhibits contain different scripts much like circulars of yore which would carry the same message in both official and regional languages, for the benefit of all residents.

Nara, the second section of the exhibition, is about ‘hidden transcripts’ — texts that emerge in social spaces defined by dominance and oppression. “Hidden transcript is an anthropological term for how people resist authority or power through their own ways of communication. As an artist, I wanted to highlight recent protests in my own way.”

Pushpamala says she came across compelling slogans at a poster-making workshop she had organised in 2020. “I wanted to memorialise them and give them a permanent form. Just like metal was used to record important documents in ancient times, the Nara exhibits are also records of the present times. I used the same technique to incise words and drawings. Protest posters are usually not well designed, while protest poetry and slogans are ephemeral; they tend to get forgotten.” 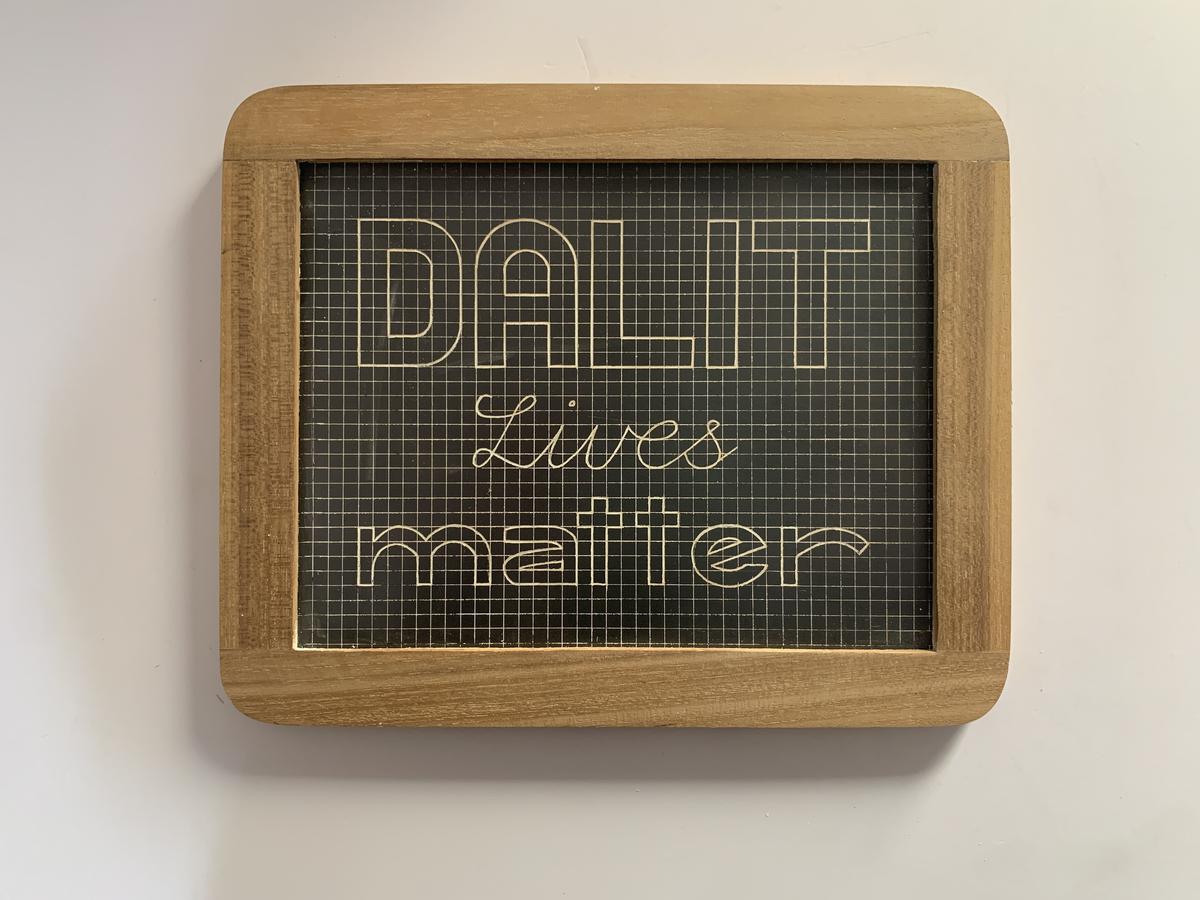 The 50 exhibits in this section look like chalk-and-slate displays but are actually copper plates treated with patinas. Their content ranges from sketches and poetry to compact, hard-hitting words in English, Hindi and other regional languages.

According to Pushpamala, both sets of works share similarities. “Both are like tamara shasanas in their own way. One is a historical record — history is unearthed by looking at archaeological domains and deciphering them, while the Nara works are a record of contemporary history, of what is going on right now.”

‘Epigraphica Indica’ will be on display at Gallery Sumukha, Bengaluru till April 16, 2022