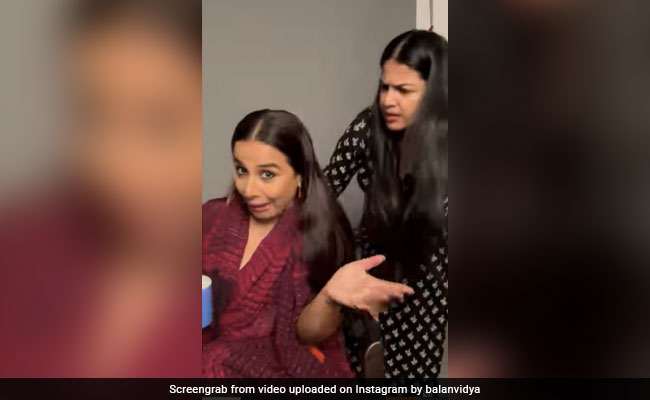 Vidya Balan in a still from the video. (courtesy: balanvidya)

Vidya Balan has won thousands of hearts with her striking onscreen presence, unique personality and candid candour. If there’s anything that makes her even more relatable, it’s her social media presence. Vidya Balan loves to entertain herself and her Instafam with quirky social media posts. She can also show us her “drama queen” version sometimes. Now, Vidya Balan has posted a dramatic Instagram Reels and with what flair. In the video, she sits facing the camera in a red garment. She is holding a cup in her hands while lip-syncing to the audio. Making animated gestures, Vidya Balan says, “Is it me? Am I the drama? I don’t think I am the drama. Maybe I am.” She is joined by her manager Aditi Sandhu who says, “Am I the villain? I don’t think I am the villain.” The caption read, “Monday and plenty of drama with my villain in crime, Aditi Sandhu.”

Vidya Balan never misses out on a chance to flaunt her frank sense of humour with her Instagram fans. She adds this element to her posts quite often. Posing in wedding couture by Mint Blush, the actress made our hearts skip a beat. But she had more to say. Her one-line caption was enough to help us relate to her situation. She wrote, “Missing all the weddings and baarats I did not attend.” Of course, we can relate to that.

When we say that Vidya Balan stays put to her work most of the time, we aren’t joking. The actress’ post reveals a lot about her hectic schedule throughout the week. While she is working round the clock, she also manages to show up on Instagram and tell us about her workday. She posted photos in a denim ensemble. Again, with a cup of coffee. She wrote, “Shoot. Coffee. Shoot. Coffee. How was your week? Batao na [Tell me].”

Vidya Balan was last seen in Sherni. She will be next seen in an untitled film alongside Ileana D’Cruz, Pratik Gandhi and Sendhil Ramamurthy.